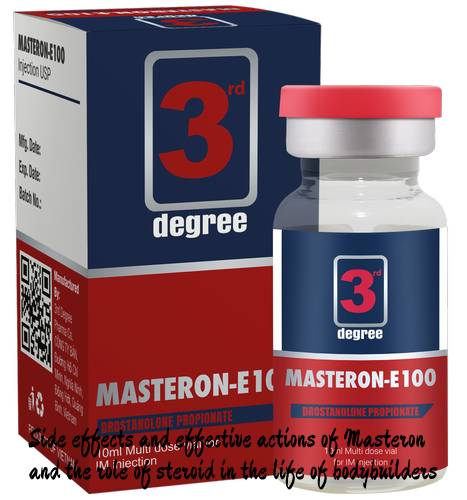 Masteron is an anabolic steroid derived from dihydrotestosterone (DHT). Notably, Masteron is a DHT hormone structurally altered by adding a methyl group to carbon 2. It protects the hormone from metabolic breakdown by the enzyme 3-hydroxysteroid dehydrogenase found in skeletal muscle. It also increases the anabolic nature of the hormone. This is a simple structural change – all that is needed to produce drostanalone, and so a small / short ester of propionate is added to control the release time of the hormone. Drostanolone enanthate can also be found in some underground labs that don’t need to be administered as often, but it’s quite rare compared to the propionate version. Most Masterones on the market are drostanolone propionate.

Functionally, Masteron is known to be one of the few anabolic steroids with strong anti-estrogenic properties. This steroid not only lacks estrogenic activity but can also act as an antiestrogen in the body. Thus, it has been shown to be effective in the treatment of breast cancer. In fact, the combination of Masteron and Nolvadex (tamoxifen citrate) has been shown to be much more effective than chemotherapy in treating inoperable breast cancer in postmenopausal women. It also makes it popular with bodybuilders because it can virtually eliminate the need for anti-estrogen if done right. It will also be useful during the cutting stage for the therapeutic effects it can offer.

Masteron has relatively low anabolic and androgenic properties; However, these estimates are somewhat misleading. It is important to note that DHT, the basis of Masteron, is five times more androgenic than testosterone, with a much greater affinity for androgen receptors. This in turn makes you more resilient and can help you burn fat faster. Most anabolic steroids are known for their ability to stimulate metabolism, but strong androgens tend to directly promote lipolysis.

As an anabolic steroid, Masteron is not known to promote muscle growth. It has never been used to treat muscle atrophy in a therapeutic sense and is almost always used in reduction plans in athletes. However, this can contribute to a significant increase in strength, which can be beneficial for an athlete who is not necessarily strong.

The use of Masteron in medicine and sports

The use of Masteron Propionate has shown good results in post-menopausal breast cancer. Its use is still accepted by the medical community. However, it is already very rarely used for this purpose, because today more effective means have emerged for women.

Bodybuilders, on the other hand, put it to work. Its use gives good results in terms of increasing muscle mass and relaxing the muscles of the body. It is quite often used in combination with other means, it does not have strong negative consequences. It is sometimes used as an aromatase blocker.

See also  Amazing Results During Masteron Steroid Use And Its Benefits

The effects of Masteron will definitely be more effective during the cutting cycle. But to really appreciate the effect, you need to be very weak. For this reason, the hormone is most often detected at the end of a cycle before bodybuilding competitions, when a person should already be quite weak. Extra Masteron will help you get rid of the last piece of fat that often remains at the end of your life cycle. He also makes sure his body is as strong as possible. Certainly, the antiestrogenic effect only intensifies this overall picture. For those who are not lean bodybuilders, the effects of Masteron may not be as visible. A person with less than 10% fat should see some results and experience more serious results.

As a powerful androgen, Masteron can be beneficial to athletes looking for strength. This can be a very helpful steroid for an athlete on a low calorie diet to maintain the specific weight needed for their activity. A person can easily gain a modest increase in strength and a modest improvement in muscle recovery and endurance without unwanted weight gain.

As a filler, the effect of Masteron will be quite weak. The hormone can cause weight gain similar to Primobolan Depot, which also would not be so strong if the total dose was high enough. However, the relative increase in size will be very modest as many anabolic steroids are better suited for this period of steroid intake. There are those who want to include Masteron in their weight gain plan because of its antiestrogenic effect and weight loss. The latter ensures that the accumulation of fat in the off-season is minimized, but this is not enough at this stage. Without it you can control your fat. As for antiestrogenic activity, high aromatase activity is usually observed in the off-season due to high doses of testosterone. Progesterone activity is also usually high with the addition of nandrolone and possibly trenbolone.

Properties and characteristics of Masteron

Over time, the Masteron steroid dosage has found its place in bodybuilding. Thanks to experimental tests, it was found that the drug allows professional athletes to prepare for competition in a short time. Amateur athletes who use Masteron Drostanolone get noticeable muscle relief. According to reviews, the first effects are noticed after a week of use. Active muscle growth begins.

The drug is popular with professional athletes who undergo doping control before competition. The half-life of Masteron (drostanolone propionate) is 2.5 days. The active ingredient is not retained in the body, so the detection time in the blood is minimal. You can buy Drostanolone Propionate (Masteron) from an online store that specializes in strong muscle steroids.

The intake and dosage

Before using the drug, you should examine yourself and get a doctor’s opinion about your health. The dose is selected individually by an experienced specialist.

A 6 week course is recommended for beginners. The injections are given every other day at a dose of 50 mg. Combination with other substances is initially contraindicated.

Experienced athletes should inject 50mg for the first 3 days, then increase the weekly dose to 400-500mg. The course of Drostanolone propionate is 8-10 weeks. A combination of drugs is allowed.

How to properly inject Drostanolone Masteron? The injection is administered intramuscularly, following the rules of hygiene and sterility. There should be no air bubbles in the syringe with the solution. The needle is inserted 3/4 of its length at a 45 ° angle into the thigh.

Combination with other steroids

Masteron is often stacked with Stanozolol (Winstrol), which is used at a dose of 30mg per day. This combination mutually enhances the “drying” effect.

Masteron and 40 mg of testosterone propionate per day are recommended for gaining muscle mass. Also, to increase muscle strength and endurance, drostanolone is combined with 50mg of Oxandrolone per day.

With a combined course, the dose of drostanolone propionate is reduced to 300-400 mg per week. This amount of substance is sufficient for optimal sports results.

Due to its lack of aromatizing activity, Masteron exhibits some of the side effects most feared by steroid users, which are estrogenic in nature. This means that there will be no water retention and gynecomastia if you take Masteron (but if you combine it with other flavored steroids, these side effects will still need to be treated). This is very important for cutting and means that the puffy appearance that can ruin your body is not a problem with Masteron.

If you have hair loss or baldness in your genes, Masteron’s androgenic activity can cause this problem much faster than in your case. Not all men will experience hair loss, some will not have a problem in this regard as it is one of the few side effects that mainly depends on genetics. Likewise, there is the problem of acne and increased oily skin; Again, this is more likely in children who had severe acne in their teens.

Since Masteron is primarily used during cutting cycles, your diet is unlikely to contain cholesterol-threatening foods. However, it’s not just what you don’t eat that counts, it’s what you eat. Therefore, eat foods rich in fatty acids. Other cholesterol-lowering products, such as avocados, nuts and garlic, are also important. Cardio at the gym as part of the cutting cycle also helps maintain healthy cholesterol levels during a Masteron cycle.

This is a steroid that suppresses your natural testosterone production quite a bit. Therefore, it is fundamental to include a testosterone steroid in your cycle to avoid falling into a low testosterone state.

Only a small dose of testosterone is needed to perform this function during the Masteron cycle as you do not want to use this steroid for any purpose other than testosterone replacement.

Since Masteron is based on DHT, which is significantly more androgenic than testosterone itself, it poses a relatively high risk of virilization for female users and is therefore not an ideal steroid for most women unless used in high doses. The effects and use of Masteron will stop when effects such as a deeper voice and body hair growth start to take effect.